Its is really a miracle that Sai attends the Satsangs and meets people all over night and just sleeps for two hours only, but again he looks fresh like a flower. I have seen him attending six & seven consecutive functions all over the night where Sai hardly got rest of 1-2 hour but when he came back to public he looks fresh as if he got rest for 8 hours. This is a miracle.

Though, Sai starts his day early in the morning, he goes to see people in different places, meets everybody, gives them remedies for their problems, then sits amongst the public till late in night say upto 4 o clock in the morning and he gets just 1-2 hours to rest. Again, he starts his day with the same speed and has the same freshness on his face.

Never his face, neither his eyes shows that Sai had just slept 1-2 hours. We are human beings and we need at least 8 hour complete sleep / Rest and if we don’t sleep even for one night we fall sick; but my Guru Sai Sadhram has a “Shakti”, “Power” gifted by God which show’s that he is a true Saint/Guru. 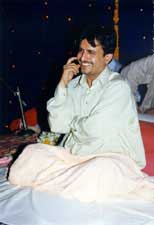