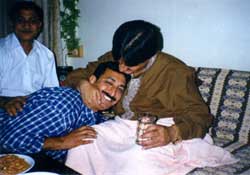 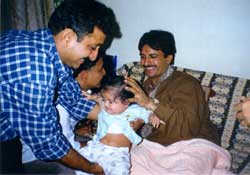 My parents and grandparents, all of them have served at Devri Sahib. My father was very fortunate to serve Bhagat Sahib himself.

I remember as a child when I used to go to Darbar Sahib with my parents. That time I was so small that I loved taking Prashad and playing around Devri Sahib.

We shifted from Daherki to Sukkur and then to Karachi but we had that special touch with, Devri Sahib. Even now when we have shifted to India the memories of our childhood are still fresh in our minds and will always be as fresh as the fragrance of Roses in our minds. A few years ago we came to know that Sai Sadhram Sahib has come to Pimpri and myself and my other brothers thought of going to him and meeting him. We also planned to invite him to our house and we thought that within an hour or so we will come back home but to our surprise when we reached there we saw so many people around Sai Sadhram Sahib and we didn’t come to know how time flied. We kept sitting there listening to him, looking at his magnetic beautiful face which was so fresh and so attractive and by the time we got to meet him it became early morning and there was no trace of any tiredness on his face and even we were feeling very fresh. Sai Sadhram Sahib’s saintly vibrations make the people around him feel comfortable and happy.

Before, I had no Guru in my life but now after meeting Sai Sadhram Sahib that shortcoming in my life has been fulfilled by his Divine personality.

May Sai Sadhram Sahib’s blessings always shower upon us and the whole mankind.