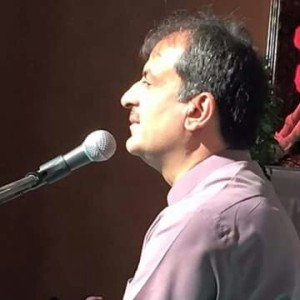 Every word Hazoori roop Sai Sadhram speaks is filled with grace. Wherever he goes his divine vibrations bring peace within the stressful hearts of millions of people. His one glimpse washes away all the filthiness and impurities in our lives. His arrival / visit at any place transforms it into a beautiful heaven. His beautiful magnetic smile illuminates and electrifies the whole atmosphere. His healing touch discards the incurable diseases and worries of people. His divine vibrations bring happiness and joy in the lives of people. May god gives him long and healthy life.
One day Mrs. Dhani Jethwani wife of Mr. R.K Jethwani from Mumbai, told me, that her loving daughter, who was married for 10 years, did not have children and her daughter had undergone treatment for this in India as well as in The United States but in vain.
Mrs. Dhani asked me if Hazir swaroop Sai Sadhram Sahib can bless her daughter so that she is blessed with a child. Since I was aware of the mystical , wondrous and miraculous powers of Hazir Swaroop Sai Sadhram Sahib, I said yes to her.
After hearing yes from me, I could see rays of hope in her eyes for her daughter.
At that time Dhani jethwani’s daughter was undergoing a treatment under the best doctor of the city.
I told Sai Sadhram Sahib about the problem Mrs. Dhani jethwani’s daughter was facing and requested him to to bless her. I also told him about the treatment she was taking at that time, and asked him if the treatment given to her will be successful this time.
Sai Sadhram Sahib said, that she could continue with her treatment.
I told Mrs. Dhani Jethwani about it and she was very happy and started feeling very positive.
.

After some days Mrs. Dhani Jethwani called me and she was sounding very upset.she informed me that her daughter’s treatment failed . She told me to ask Saijan that why did this happen as he had himself said that her daughter should continue the treatment.
I also became very upset and felt bad about Mrs. Jethwani’s daughter.
It was morning time around 9 O’Clock and I called Sai Sadhram Sahib. I was doubtful whether he will answer my phone call or not. But to my surprise, Sai Sadhram sahib picked up my call and in his very soft, sweet and divine voice said “SACHO SATRAM dear daughter” I could feel some kind of mystical divine power engulfing me.
I told Sai Sadhram Sahib about the failure of the treatment of Mrs. Dhani jethwani’s daughter.
Sai Sadhram Sahib in his deep and soothing voice said “ yes dear daughter, she had to undergo this treatment also, but now, tell her to stop all kinds of medical treatments, and very soon she will be blessed with a child without any medical treatment.”
I could not believe myself, but very lovingly he assured m,e that Dhani’s daughter will be blessed with a child without any treatment.
.

I immediately called Mrs. Dhani Jethwani and told her about what Saijan said. Since Mrs. Dhani Jethwani was very upset, she was surprised to hear that Sai has given her a hope, that her daughter will be blessed with a child WITHOUT ANY MEDICAL HELP.

She informed me, that doctors had already said, that now they cannot give any more medication for this treatment to her daughter, and so there were no chances of her daughter getting a child, but Since Saijan himself had given her hope, she became positive, and her faith in the healing powers of Sai Sadhram Sahib became very strong.
Mrs Jethwani’s daughter went back to USA.
After some months Saijan Came to India and visited Mrs Dhani jethwanis house.
It was an unforgettable moment for the whole Jethwani Parivar. Saijan performed Ardas Sahib in the name of SANT SATRAMDAS SAHIB and prayed for Dhani Jethwani’s daughter.
Everyone standing there was spellbound, the whole atmosphere was filled with the vibrations of divine blessings showering upon everyone by the Great Saints of Raharki sahib.
Sai Sadhram Sahib invited Mr and Mrs Jethwani to come to Raharki Sahib to pray for their daughter at Devri Sahib.

Mrs Dhani Jethwani and Mr.R.K Jethwani along with me and my family decided to go to Raharki Sahib on the auspicious occasion of the Birth anniversary of Sant Kanwarram sahib on the 13th of April.
Mrs, Dhani Jethwani Prayed for her daughter at Devri Sahib and looking at my daughters she said, that she wanted girls like my daughters for her daughter .
They say, faith does wonders and prayers are always very powerful.
After some months Mrs. Jethwani informed me that her daughter had conceived without any medical treatment. She was very happy, and then the day came when Mrs. Jethwani’s lovely daughter, gave birth to a beautiful girl.

We should get down on our knees, to thank Sai Sadhram Sahib, and glorify the name of Shehenshah Satguru Sai Satramdas Sahib, whose name Sai sadhram Sahib is spreading all around the world.
We should revere Such  a great Sant, for being there ,in our lives, who is here to remove our worries and guides us to the path of oneness, in this valuable  human form.
He says that doing NAAM SIMRAN and DHYAN (meditation) is the only solution of all the problems in our life.

He advises to do Naam Simran and Dhyan every day and make it a part of our daily routine.
Sai Sadhram Sahib Says , a family that does Naam Simran, and also performs pooja and prayers in their house regularly, is always blessed by great saints and Mahapurushas. Such families are always blessed by  Shehnshah Satguru .