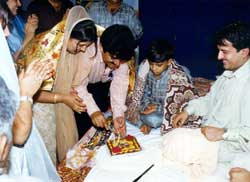 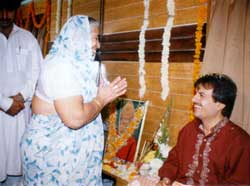 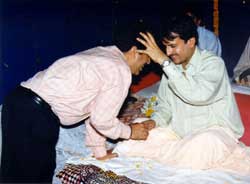 There are seven wonders in the world, but what I want to share with you is the eighth wonder of the world. This, is not only an experience, but can be termed as ‘Miracle’.

I had the first glimpse of Sant Shri Sai Sadhram Sahib at the residence of Mr. Notandas Jagwani in the year 1995. I, along with my mother, around 11.30 p.m. went to Mr Notandas’s house & was surprised to see the large gathering which was full of peace and bliss. I was asked to seek the blessing of the renowned Saint. I went forward, touched the feet of Baba Gellaram Sahib from Jalgoan and came back. On returning, my mother questioned me, why didn’t you seek the blessing of Saiji? I asked her, where was the Sai, and she told me, the one sitting beside Baba. He is the one who has come from Pujya Raherki Sahib. I was just shocked. My first impression of Him was oh! He looks very handsome like a film star – a very fascinating and dashing personality. I was coaxed by my mother to seek the blessings of this Great Saint. When I went forward to seek the blessing, I felt an eternal bliss. His mere touch on my head swept clear all the feelings of bitterness and resentment I had for the entire being.

My mother invited him, the next day, at our residence, and my mother told him about me, that I have two daughters and wish to have a son. He said that he would visit us in the afternoon and bless us. I thought may be, he is trying to avoid us, and may not turn up. But to my utter surprise, he came along with Baba Gellaram Sahib. Our joy knew no bounds. He blessed my wife and me and gave us an assurance that there would definitely be a male child in our family, and on the 6th of August 1996 with the blessings of Shri Sai Sadhramji, I was blessed with a healthy baby boy. This same child has started saying that “I am Sai’s child”. Isn’t it a miracle? With Sai’s blessings, I got an opportunity to visit Pujya Raherki Sahib in May 1998 and on reaching there my heart was filled with unspeakable joy and a strange peace filled my heart. Tears glistened in my eyes and I was absorbed in the serene atmosphere. I was introduced to Sai Sadhramji’s brothers and believe me it was like we have reached Ayodhya Nagri on this mother earth. Sai Sadhramji – Shri Ram, Sai Vikramlalji – Shri Laxman, Sai Balramji – Shri Bharat and Sai Rupramji – Shri Shatrughan. How much love was showered by Saijan upon us cannot be expressed in words but we can only say that if there is heaven on this mother earth it is Pujya Raherki Sahib and only Pujya Raherki Sahib.

The time came when we had to get ready to come back but there was something, some spiritual power at Pujya Raherki Sahib which was not letting us move from there. There was a secret desire that we at that time wanted Sai to stop us to go back and to stay back at his feet forever.

There is one more experience, which I would like to share. I had purchased I.T.C shares through a stockbroker. To my bad luck, the rates went on going downwards. I was in great tension and worry and then the thought of consulting Sai came to my mind. He took it very lightly and said to leave it on Nana Sai. But as you all know, human beings are all impatient creatures. I unnecessarily took all the burden on myself and kept on cursing myself for purchasing them. There were only 2 days left, I again contacted Sai and told him about it. He said wait, watch and see. Here, I was warned by the agent that I will have to bear heavy losses. On the last day, I got a call from the broker, saying, even if you sell at a maximum rise of 8%, you will bear the loss. I was very frustrated and depressed and left the house to buy some groceries. From the groceries shop, I called at my residence and they told me that there was a call from the broker and he wants to speak to me urgently. I chanted ‘Sai’s’ name and made a call to the broker and he said that even I am surprised why the I.T.C shares have gone up and on calculating I found out that instead of making losses, I was making profit. Next day, there were headlines in the newspapers, due to wrong code number, the rates of I.T.C had increased. Isn’t this also a miracle?

There are many miracles occurring in our day to day life, but life is so short, that it is very difficult to describe them in such a short span. My Sai – is the messenger of God. He weaves roses in our earthly lives. As the sun’s rays, the blood and the air is necessary, so is the chanting of “Sacho Satram” necessary in our daily life. In his following, I never feel alone or helpless. He has led me from darkness to light. He gives me an unconditional love. He is a picture of spiritual beauty. What a Colossal figure.