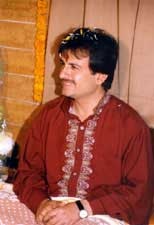 Sai Sadhram sahib is young,educated,speaks sweatly,always smiling infact smile is his such an asset which attracts the people at large. With the God gifted quality of getting attracted towards him he is illuminating the Amar jyoti of Shehensha Satguru Sai Satramdas Sahib and Amar Shahid Bhagat Kanwarram Sahib not only in sind but at the same time in each and every part of Hindustan also. Sai Sadhram Sahib was on a good post but when Dulha Darvesh Sai Kanhaiyalal Sahib asked him to take the resposibility of Raherki Sahib Saijan immediately Said yes without giving a second thought to his Governmet post. Sai sadhram sahib speaks very sweatlyand at the same time he is very kind at heart, he is spreading SACHO SATRAM, a Divine Mantra every where.Saijan is very punctual about meditation,He meets his followers very lovingly,His way of walking is amazing he walks so fast that his followers literally run to reach him.He walks a lot and visits many a places in a days time. saijan pleases every one He leaves his divine messages everywhere. Most of the time he gives examples from the life of Bhagat sahib. Saijan has immense respect and love for his Guruji.

MY OWN REAL EXPERIENCE

Some months ago my husband got a phone call from someone who told my husband that he he has some CD’s and audio cassettes which he wants me to listen to and put them in writing and assemble them into a form of a book.

It was a very difficult job, My husband asked me”shobha he is calling every day if not then let us say no to him” I asked my mother and my daughter but even they could not decide. This was for the first time I was going to do something I had never done before. Translating, or composing was easy as I was used to that kind of a job but this was little difficult.

One week passed and Naresh Talreja was calling up every day. He is a businessman and he is a devotee of Sai sadhram sahib, he has lot of respect for Saijan infact his full family adores Sai Sadhram sahib but his feelings are little more stong.Before I could decide any thing Naresh Talreja sent 2-3 CD’s to me and asked me to atleast listen to them and also said that the person who has given him my treference told him that this kind of a job only Shobha and Ram can do.

Naresh had also asked me to write word to word what Saijan said in his pravachans.

It was sunday and I asked my daughter Amrita” let us listen to these CDs and decide wether we can write them or not” first we viewed the CD on T.V. the Cd was clear but how to write. so we decided to view the CD on Computer. My daughter’s hard work started showing results she started to write she would listen to one sentence and pause and write that sentence and then again she would listen to another sentence and wrote each and every Cds duration was of about 60 minutes. Sai Sadhram sahib’s Pravachans arePearls of Knowledge. Earlier we had seen Sai Sadhram Sahib but we never got the chance to meet him personaly. He is always smiling and has kindness on his face andhas the divine power of attracting people all this we realised while viewing the CDs. Listening to the CDs was taking a long time The first Cd took 10 days we were writing very slowly slowly when we finished writing half a CD I sent the written Pravachan to my Mother (Paru Chawla) to know how it was written. She encouraged me and said that it was very interestingand she enjoyed reading it. Now I got the signal taht I can write. I called up Naresh and told him that I will be able to do it but it will take time He was very happy and I could feel his happiness. Naresh said” start the work and with Saijan’s blessings you will be able to finish it fast” He asked me to continue writing and said that even he will listen to the CDs and will help me. We started the work andthis way within a few months the first part of the book was launched.This book contained the pravachans of 9 CDs.

Sai Sadhram Sahib was visiting small and big cities of India that time. he was attending somebodys’s wedding, somebody’s birthday ,the formation of a panchyats.house warmings,death aniversaries,Birth aniversary of some saint, important days ,festivals on each and every topic he has given a messege.

Atlast on the occasion of launching of the first part of the book Naresh Talreja’s dream came trueThis book was written in the Devnagiri and Sindhi dialects,it is of 148 pages. On the successful completion of the book myself and Naresh Talreja’s eyes were into tears we could’nt belive it. It was a different experience, it was a real hard work. May saijan shower his blessings upon us.

Saijans Pravachans are all in Sindhi he speaks sindhi which any one can understand. His way of making people understand is very different, he begins by giving an example and then in between he tells many other things and comes back to the same earlier example and completes his pravachans.

In this regard only I got to meet Saijan Naresh introduced me to Saijan and told him that I was the one who had put his pravachans in the form of a book by viewing the CDs. I was so happy I was really feeling very proud on the top of the world. I must proudly tell that this work was impossible without the help of my colleagues,Jyoti Otwani, Roma Motwani, Moti Bajani and Paru Chawla.Since I never went for any Satsangs and I got the chance of listening to the Pravachans sitting at home and got to learn from them. May Sai bless us. This way the other part of the book also got completed and launched I am happy that I could do this work.If a person has will power and the blessings of the great Saints he can do any thing on this earth.