They are Sai Vikram lal Sahib, Sai Baliram Sahib and Sai Roopram Sahib, and they also, serve at Raharki Sahib with full devotion and dedication. 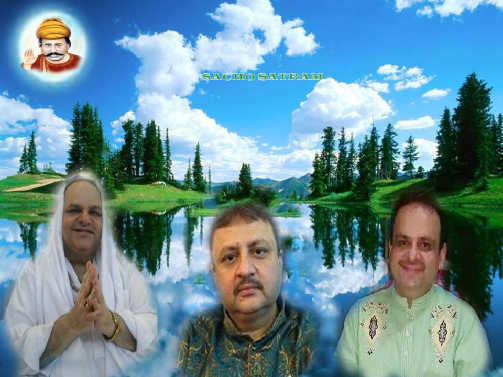 Babal Sai Bhagwandas was a true and dedicated devotee of Sai Satramdas Sahib. It is a well known fact that during Meditation Babal Sai Bhagwandas Sahib would connect and communicate with Shehenshah Satguru Sai Satramdas Sahib. He would ask for the blessings from Shehenshah Satguru , for the poor and needy people who came to devri Sahib to seek the blessings.

it is a very well known fact that Vishni Chainani, who was Babal Sant sai Bhagwandas Sahib’s cousin sister was ill during her pregnancy and her health was getting deteriorated . She was advised to take bed rest for almost all her nine months. Doctors told her husband who was also a sincere devotee of Shehenshah Satguru Sai Satramdas Sahib that her survival chances were very less. Vishni’s father Sadarangmal was a committed devotee of Saint Satramdas Sahib. He had written many heart touching bhajans in the praise of his Satguru Sant Sai Satramdas Sahib which were sung by Sant Bhagat Kanwar Ram Sahib also.

One day during the auspicious time of Brahma Mahurat, Vishni had an auspicious sight of Shehenshah Satguru Sant Sai Satramdas Sahib standing near her cot. She could not believe her eyes and was spellbound.  Sai Satramdas Sahib was a greatly revered Sant and during those ambrosial moments, he blessed her with his Divine DARSHAN and asked her to go to Devri Sahib and get a thread of blessings from her cousin brother, Sai Bhagwandas Sahib. Vishni, who was greatly surprise told about her Satguru Darshan to her husband. Vishni’s husband immediately made the arrangements and took Vishni to Devri Sahib, where Babal Bhagwandas Sahib lovingly welcomed them .

When Vishni told Babal Sai Bhagwandas Sahib about the great Divine DARSHAN of Sai Satramdas Sahib, Babal Sai asked her to take rest, and he went to do meditation. After he got up from his meditation , he told Vishni that during Meditation Satguru Sai Sant Satramdas Sahib told him, ,that He had blessed her with his divine DARSHAN and asked him to give the sacred thread of Blessing to her . Babal sai Bhagwandas Sahib gave the thread of blessing to Vishni and told her to tie the thread around her neck, till she delivers the baby successfully.He said, that she will deliver the baby without any problems. God is great. At the time of her delivery Vishni tied the thread of blessing around her neck and With the blessing of Satguru Sai, Sant Satramdas Sahib, Vishni delivered her, child, without any complications. Though a lot of poison had spread in her body, but she and her child were saved. This is a great example of Satguru Sai’s miracle. It is a well known fact, that the people, who with their true intentions, and honesty, remember Sai Satramdas Sahib, get rid  of their problems. Satguru Shehenshah Sai Satramdas Sahib listen’s to all those, who remember him with true love, and seek his blessings.