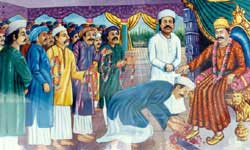 Once when Sant Sai Satramdas Sahib reached for the wedding reception at Seth Ubhria Ram’s house in Jacoabad, hundreds of people came and welcomed him with Garlands. Everyone was saying, that God himself had arrived.

There were about 101 sants, but among them Sant Sai Satramdas Sahib looked charismatic, royal and glorious. He was offered a seat which was Little higher then the other seats with a beautiful silk sheet placed on it. With the spiritual glow and the divine glory on his pleasing face, Sai Satramdas Sahib looked like Shree Krishna sitting with Gopis.