silk cloth was an obstacle to prayers 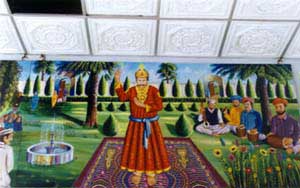 Once Shehensha Sant Sai Satramdas Sahib, went to Shahdadpur on an invitation from the panchayat of Shahdadpur. Many a people from the surrounding villages, had also come to seek his blessings.

Early in the morning, wearing a simple and elegant long red robe, Ghungroos on his feet, Shehenshah Sai Satramdas sahib, along with his followers, sang, in the praise of the lord almighty, and it looked as if, Lord Krishna was standing among the Gopis.

The prayers and Bhajans  by Shehenshah Sant Sai Satramdas Sahib, held people spell bound. Not only humans even the birds and animals, used to sit absorbed. When Sant Sai Satramdas Sahib, raised his hands in supplication to the Lord Almighty, to offer prayers by singing, devotionally in his deep and melodious voice, Even Sant Kanwarram Sahib’s voice could not reach his level of  intense high pitch .

That was the last day Kanwar Ram Sahib wore a silky dress. After that he always wore simple cotton clothes.

When Saint Satramdas Sahib came to know that Bhagat Sahib had kept himself away from the fake shine of the silky clothes, he praised and blessed Bhagat Sahib and with the Blessings of Shehenshah Satguru, Bhagat Sahib got so much popularity that he became the king of the hearts of the people of Sind and is still remembered by the people with great respect. His bhajans, kafis, and ragas are still very popular through out the world in the Sindhi communities .