Divine Shakti is in Divine Bhakti 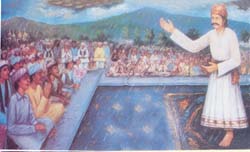 In the morning at the time of Amrit vella when Saint Satramdas Sahib was performing bhakti by singing beautiful bhajans in the divine name of the God almighty in his melodious voice, thousands of people gathered and were held spellbound.

The stentorian, high-pitched, melodious voice of Shehenshah Satguru seemed as if it had persuaded the Lord Almighty to merge in the existing life on the earth.

Saint Satramdas was requested for Palav Sahib (it is the custom of holding a prayer meeting requesting Lord almighty to fulfill their wishes ).

As Saint Satramdas started singing raag Sarang in his beautiful touching voice the clouds started gathering in the sky , the cold wind started blowing and it started drizzling.

After it rained for some time Shehenshah Satguru Saint Satramdas Sahib sang two lines of Sorath and the rain immediately stopped, and exactly after one year the head of the panchayat of Balochistan was blessed with a son and he sent Prasad to Saint Satramdas at the dham Sahib in Raherki Sahib.