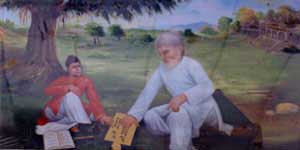 Since childhood Sant Sai Satramdas Sahib used to spend most of his time in meditation. When he was born he was blessed by his father, the great Sant Sai Khotaram Sahib, with the precious NAAM DAAN.

When Sant Sai Satramdas Sahib became eligible to study, his father the Great Sant Sai Khotaram Sahib asked Bhai Veeruram, who was a scholar to take Sai Satram das Sahib under his guidance and give him the best education.

Saijan had a great aptitude for studies. Within a very short span of time he learnt, upanishads, Puranas Vedas, Gita, Gurbani and many other religious scriptures . The deep intelligence and unremitting curiosity of Sai Satramdas Sahib, to understand and gain more knowledge would make Bhai Veeruram feel very proud of Him.