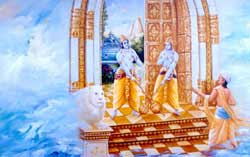 Once when Saint Satramdas Sahib went to Roheri for the anniversary of Sai Wasanshah, a man whose name was Moolchand, (Who was one of the known devotees of Saijan) told Saijan that Lahorimal who was also his relative had got a decree from him.(During the British rule it was a rule that if somebody borrowed money from someone he will have to give in writing the transfer of possession of his own property to the person he is taking money from, and that document was called decree) Only six months were left for the repayment.

Within a few days Lahorimal fell sick and passed away. After a bath was given to his dead body (a Hindu custom) his body was kept on the cot for the funeral. Suddenly the door opened and wrapped in his white dress, for his last journey, Lahorimal appeared, and every one present was shocked. Lahorimal said that actually his soul had already left his body but when he reached at the divine feet of the Lord in heaven the guard outside told him that it is true that he had earned a lot of blessings but because he did not obey Saint Satramdas Sahib, who had to go back from his house unsatisfied, all the good deeds earned by him will go waste, and now he will have no place in heaven as well as hell and he asked the guards to give him a little time to go back so that he can correct his mistake. The guards agreed and that”s is why he said that he had come to withdraw the decree on Moolchand.”