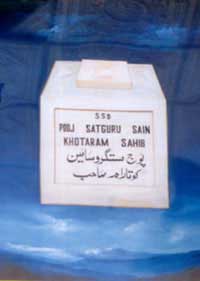 In the beginning of nineteenth Century, during the spring, when birds were twittering, chirping and singing in happiness. The Cool breeze, was making the hearts feel happy and comfortable. A cuckoo in her sweet melodious voice, was remembering the master, of her beautiful surrounding, all living beings. Every small creature, was enjoying the spiritual peace. Suddenly, some lovely fragrance, spread in the air, which made, all the living beings feel, at utmost peace, and in such an atmosphere the mother earth also felt grand.

This was an indication, of something miraculous, which was going to happen. every particle in the entire universe was illuminated, with the light of pious divine joy, as this was the precious time of the divine birth of a great Master, a great Sant, Sant Khotaram Sahib. The child was quite, calm and did not make any noise usually made by a new born baby.  He was chanting the divine Shabd OM OM and everyone who was sitting there at that time witnessed the miracle and was surprised, as they had never heard such a sweet and melodious voice before. After some time the child closed his eyes and went into deep spiritual meditation. During the childhood days when other children kept playing, this godly child, was engrossed in the thoughts of his master. He would sit in a quiet place deeply absorbed in meditation. God had blessed him with the melodious voice so pure and divine. The harmonious divine sounds of joy, longing, and contentment would flow within his pious heart.

Those who would listen to his pleasing voice, felt the need to achieve divinity. The magnificent voice, that used to flow from his heart, gave calmness, to not only the humans, but also to each and every living being. This was the reason, why when he sang, a raga, along with his followers, the birds and other small creature would  also came near him, to listen to him. His name reached, each and every corner of the world. Many  people became his students and learnt under his guidance. Delegations from different cities, started coming to him, to seek his blessings. Whenever he traveled, he took his food and other necessities along with him, and would always advice others accompanying him, not to become a burden on anyone. He would say, that,  one must eat out of what he earns, through his hard work. Sai Khotaram Sahib would always be engrossed in chanting , the name of his master in, but to keep his disciples disciplined on the path of spirituality, he would make them also chant the Divine Name of the God almighty, at the regular scheduled time, so even while traveling, if they were passing through a jungle, or any other deserted pace, they would sit there, and Saijan would make his disciples perform bhakti.

On listening to Sai’s melodious voice, all the birds,  insects and reptiles would gather around Aad Satguru Sai Khotaram Sahib. The snakes would coil themselves around the tree branches, and would lift their heads up, to listen to Saijan’s mellifluous voice. All the land would get covered with small insects, and as soon as the bhakti would come to an end they all would go back to their paths. In such a pious atmosphere, no lion would look at the goats as food, and no snake would look into the nests of the birds for their eggs. Everything Aad Satguru Sai could see he perceived God, in everything.