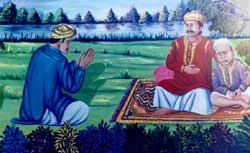 Khanumal took Sai Amolak Das Sahib for a horse ride and then took the child Amlok das Sahib to his house. His wife was at home at that time.

Some Darvesh/Fakir had told Khanumal’s wife that if she sacrifices a child of some great saint,  by whirling him above and around her head, clockwise and anti clockwise, she will be blessed with a child .

So when Khanumal brought Amolak das Sahib, the child of Sant Satramdas Sahib, she could not resist and wrapped a red cloth around him. She put red Tilak of Sindoor on his head and whirled him 7 times above and around  her head, ( 7 times clockwise and 7 times anticlockwise), and to her shock she realised, that Sai Amolak das had put his head down and he  was no more.

Everyone was sad and the whole atmosphere was filled with sorrow. People were wondering why Khanumal had to commit such a sinful crime.

In such a tensed atmosphere Sant Satramdas Sahib asked people to calm down and said, “We shall be happy, in, whatever God decides for us. There is no fault of Khanumal in this. Actually he came to me and asked me to allow him to take my son Amolak das, so that he can fulfill his thirst of spending some time with him. Now I pray to God that May God brings the season of happiness in Khanumal’s life”.

After one year a child was born to Khanumal’s wife.

When the child was born no one from the family, friends and relatives wanted to go to wish Khanumal and his wife, because people were very upset at what he had done with Sai Amolak das Sahib.
When Sai Satramdas Sahib came to know about this, he called all the friends, relatives and family of Khanumal and said that a child with the grace of God was born in Khanumal’s house and it was the duty of everyone to go and bless Khanumal’s child and welcome him with love so that when he grows up, he spreads love and not hatred.
he said, that, What we give the child today, he shall return the same to the society when he grows up. So everyone should welcome him with love.

Sant Satramdas Sahib made great sacrifices and deserted things that most people find valuable and worthy.