An Experience of Sadarang Mal

It is said that when a person surrenders himself to his Gururji, his Guruji, takes the full responsibility of his life, and gives him support and shelter forever, and his life is safe, under  his Guruji’s divine shelter. 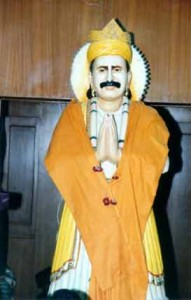 There was a person who was a staunch devotee of Sai Satramdas Sahib and he used to write heart warming poems in the praise of Sant Sai Satramdas Sahib, and many of his poems, Bhajans were very beautifully sung by Sant Kanwarram Sahib. His name was Sadarang Mal. Sadarang Mal was a great poet. He loved, and deeply revered Shehenshah Satguru. Once he saw in his dream that Satguru Sai Satramdas Sahib and Sant Kanwaram Sahib had come to take him with them to his final destination as his life on this earth, had come to an end, and they  were asking Sadarang mal, to get ready for his further  journey. Sadarang Mal was blessed, and he, with his folded hands and bowed head, requested his Shehenshah Sai Satram das baba and Sant sai Kanwarram sahib, to allow him some more time, and decided a day on which he requested them to free him from this mundane body, and also revealed his wish, that he wanted to leave his body at his eldest daughter, Naanki’s house. Sadarang mal did not want to leave this world while he was in Daharki, because he didn’t want that his youngest daughter, who was living in Daharki, with her young children get upset.

After some years Sadarang Mal , went  to his eldest daughter’s house, and when he reached there, he told his son in law about the dream , and told him about the date on which he had requested the great Sants to take him. Then on that fixed day, Bhai Sadarang Mal slept on the floor of the room at his eldest daughter’s house,  and the great Saints came to bless him and his soul left his body for his further journey.